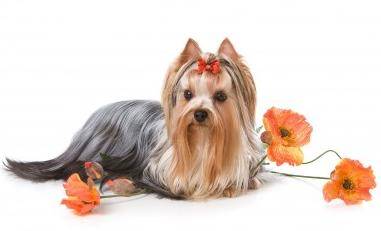 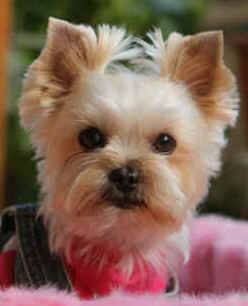 Often called the Yorkie or Yorkie dog, the Yorkshire Terrier has enjoyed the status of a favored companion for roughly 200 years. Considered to be the second most popular breed of dog in the world (the Labrador Retriever being the first), his is a story of rags-to-riches.

To tell the story of the Yorkshire Terrier is to reveal how one little hero scaled the social barriers to become a pampered pet and a star of the silver screen. There is little hope of ignoring this adorable little canine when he turns on the cuteness and demands your attention. 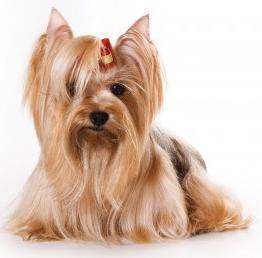 The Yorkshire Terrier owes his existence to a now-extinct breed of dog, known as the Waterside, or Weaver, Terrier. Created from a cross of Scottish Clydesdale and Paisley Terriers, which were then bred with the English Black-and-Tan Terriers, the Waterside was well-known for his long blue-gray coat and petite size of about 10 pounds.

A favored pet of many of the weavers who journeyed from Scotland into England, during the 19th century, he would then cross with the local dogs in the area and eventually produce the small Yorkshire Terrier.

At the time, Yorkies were considered a part of the working class themselves. In a time when a dog earned his keep, the Yorkshire Terrier was commonly employed in the weaving mills as a chaser of vermin. Skilled ratters, their tiny bodies were able to squirm and wiggle their ways into places that larger dogs and even cats couldn’t go, and the Yorkshire Terrier’s feisty temperament made him a ferocious fighter.

The presence of the Yorkshire Terrier in the mills became so common that it was often joked that the Yorkie’s long flowing coat was the finest product to be produced on the looms.

Huddersfield Ben is generally recognized as the founding sire of the Yorkshire Terrier dog breed. Born in Huddersfield, County Yorkshire, Ben lived a short existence from 1865 to 1871. Although an accident claimed his life at a mere 6 years, he was the winner of more than 70 prizes in a variety of dog shows and ratting contests, and he was also known to breed true-to-type, the offspring that he sired consistently weighing under 5 pounds and bearing his unique characteristics.

While the breed was originally known as the Broken-haired Scotch Terrier, the name would be changed to the Yorkshire Terrier, in honor and recognition of how much development of the breed had occurred within this small area. 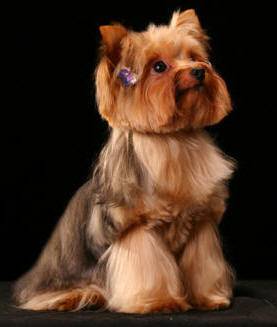 The Yorkie is a toy variety of dog, weighing in at less than 7 pounds when fully grown. Black and tan as a puppy, the Yorkshire terrier’s body coat eventually becomes a rich, glossy blue and tan shade, giving him the distinctive coloration as he matures. The only recognized coloration of the Yorkshire Terrier is this variety, so beware of any trying to sell you dogs that are parti-colored or any other variety.

The Yorkie’s coat should ideally part down the center, from head to tail, with their hair falling to each side in a straight, silky mantle. Exhibitors of show dogs are allowed to trim their Yorkies’ hair so that it is floor level, though most pet Yorkshire Terriers are often kept with a short coat.

Interesting to note is that a Yorkie dog’s coat is never referred to as “fur” but is, instead, called “hair.” This is due to its similarity to human hair; the Yorkie being one of the few breeds of “hypoallergenic” dogs, who do not shed and are considered to be better than other breeds, for those who are allergic to pet dander.

While Yorkies typically weigh right around 5-7 pounds, you will often find people who advertise teacup Yorkies, miniature Yorkshire Terrier puppies, or tiny tiny Yorkie pups. This is simply a marketing gimmick that is employed by unethical breeders in order to claim higher prices for their dogs.

Yorkshire breed registries do not recognize any kind of sub-standard or petite variety of the Yorkshire Terrier breed and actually advises against purchasing dogs that are advertised as teacup Yorkshire Terriers – such animals are not only extremely frail, but if they are true dwarfs or the result of heavy inbreeding, they are often very unhealthy and overrun with genetic faults and disease. While tiny teacups may be considered cute, it’s an unsound practice to breed such animals and the sale of mini Yorkies should be discouraged. 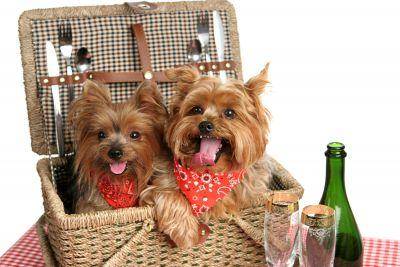 Few who have known a Yorkshire Terrier will call them a calm or placid lap dog. Born as working dogs, it’s natural instinct for the Yorkie to tear off after anything that moves – whether that is a bug on the floor, the family cat, or even their shadows, Yorkshire Terriers love to give chase. In addition to being the cat’s arch-nemesis, they are often considered to be very high-strung and nervous dogs.

Perhaps this is due to inbreeding, or maybe it comes from being so tiny, the breed is generally hyper-sensitive to loud noises, fast movements, and very nervous of strangers. Due to this, they are often known as a very shy or timid dog, excitable, and can be prone to both yapping and nipping. Additionally, they also frequently suffer from Canine Separation Anxiety and can be very destructive if left alone for long periods of time or not properly crate-trained. As tiny as he is, the Yorkshire Terrier does not require a great deal of exercise. In fact, more often than not, he will wear himself out by simply playing or tearing around the apartment in short bursts of playfulness. This makes him an ideal pet for someone who isn’t looking for a high-energy dog that will require long daily walks and trips to the dog park.

The Yorkshire Terrier is usually content to simply go outside and do his business and then come right back in, that is, provided he’s kept on a leash and can’t go chasing off after that cat over there. Yes, Yorkshire Terriers should always be kept on a leash when outside – not only does their tiny size make them vulnerable, but so does their ego, which can often prompt the Yorkie to challenge dogs (or cars) that are 10 times their size.

Anyone that’s ever seen one of these adorable little dogs should realize that it takes a lot of work to look that good. The Yorkshire Terrier is no exception to the rule. Requiring daily brushing and combing, the Yorkie’s long and silky hair needs regular trimming and grooming in order to prevent mats.

Bathing is also important, as well as carefully blowing the coat dry, due to the dog’s frailty and risk of cold. In a nutshell, the Yorkshire Terrier takes a lot of work in order to maintain that long coat and, for this reason, unless you want to make weekly trips to the groomers, most pet Yorkie owners tend to keep their dog’s coats cut to a short and more manageable length. 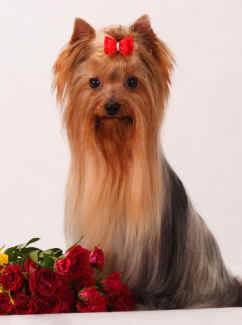 The Yorkshire Terrier is perhaps one of the most difficult dogs to train. Very excitable and notably stubborn, they require a great deal of patience and repetition in order to housebreak. While some Yorkshire Terriers can be taught to do tricks, don’t be surprised if yours conveniently develops selective hearing and tends to ignore you – these feisty little fellows are highly independent and won’t learn unless they think there’s something in it for them.

Obedience classes are recommended, though this also depends on the dog, as some are too excitable to actually do well in puppy classes with other dogs.

As with all other breeds of dog, the Yorkshire Terrier is susceptible to a variety of different health problems. Due to the extensive line-crossing and inbreeding that commonly occurs in pedigreed dogs, as well as the unethical practices of some breeders, one must take care when selecting a Yorkshire Terrier puppy. Here are some of the conditions that the breed is more susceptible to:

Is a Yorkshire Terrier Dog or Puppy Right For You? 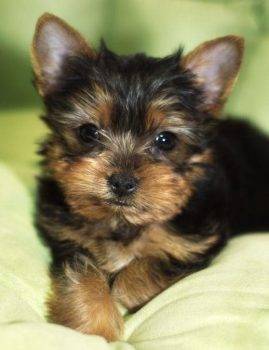 This is a very commonly asked question and yet, it is still not asked enough. Before purchasing a Yorkshire puppy, one should first take their lifestyle into careful consideration. The Yorkshire Terrier is a very frail little dog and does not do well in a household with children (both from risk of injury as well as the noise tending to make them very nervous and excitable). One must also be very careful of the Yorkie with other pets, such as larger dogs that can injure him, accidentally, during play.

Yorkies are often difficult to socialize, as well. They tend to be very nervous and high strung, which commonly makes them yappers or prone to nip. Left alone for long periods of time, this breed can also be highly destructive and frequently suffers from Canine Separation Anxiety. Of course, for many, the good outweighs the bad and the Yorkshire Terrier is worth it.

Known to be very affectionate towards their owners as well as being considered to be an ideal pet for those who are allergic to pet dander, it all depends on your lifestyle and the dog you choose in the end. Take your time and pick wisely, and you’re sure to find a wonderful pet with lots of love to share.