All About Cairn Terrier Dogs and Puppies 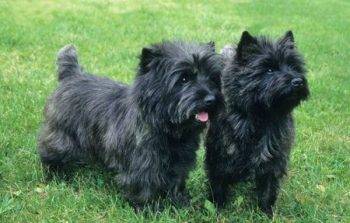 Picture of a Pair of Black and Grey Cairn Terriers 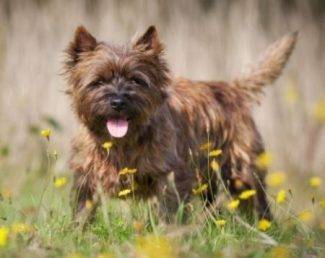 Cairn Terrier in A Field of Flowers

For many years, the Scottish Terrier dogs were simply known as “Scotch Terriers.” All developing from the same bloodlines, these Scotch Terriers originated in the various islands and the highlands of western Scotland, where they were used to flush out foxes, otter, rats and other vermin. Renowned for their courage and spunk, these little dogs could keep a farm relatively rat-free, with very little effort.

In fact, more often than not, the three different classifications could be found in the same litter, with only the coloration of the dog being used to distinguish it, one from the other. Later, a club for the Hard-haired Scotch Terrier would be formed in 1881 and would include all three varieties.

Interesting to note is that, when the Cairn Terrier dog breed standard was approved in 1882, it accepted pure white dogs, but the presence of any white markings on these dogs would be considered a fault.

Near the turn of the century, the breeders of the Scottish Terrier began to separate from the main club and breed along their own lines. Shortly thereafter, the White Scottish Terrier Club was requesting separate classes for the white terriers and the West Highland White Terrier would become its own breed.

The remaining dogs, however, would face their own troubles. The Inverness show of 1909 listed classes for what were known as Short-haired Skyes and this caused much debate over how confusing the name could be. Further proof of this was made evident in 1910, at the Crufts dog show, when a judge refused to judge the Short-haired Skye Terriers because she felt them to be in the wrong classes.

It was then suggested that the Short-haired Skye instead be known as the Cairn Terrier of Skye, since the rock cairns were a common hiding place for the mammals which this spunky little dog would be set after.

By 1912, the name would be shortened simply to the Cairn Terrier and, as they say, the rest is history. 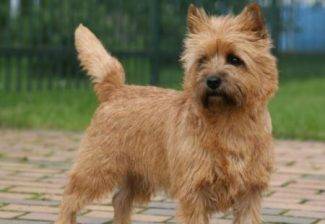 The Cairn Terrier is a very small, short-legged dog of the terrier type and is well-known for his game attitude and appearance. Solidly-built, without appearing bulky, these wonderful little dogs are broad in the chest and ribs, as well as having powerful hindquarters.

Their heads are known to be both shorter and wider than other terriers, giving them an adorably sweet appearance and somewhat foxy expression. The tail of these scruffy little dogs is commonly held aloft, but tends to be very straight and should not bend over the back.

These sweet little half-pints of energy can be found in any color except for white, though it is preferred that the Cairn Terrier have a dark muzzle, ears, and the tip of his tail should also be dark. Their coat is very hard and scruffy to the touch and is very weather-resistant.

With a double-coat, they have a short and soft undercoat and a longer, harsh outer coat. It’s not uncommon for this adorable fellow to look like he has bed head, even after a brushing, but that’s all a part of his charm. 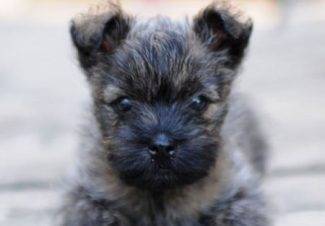 The Cairn is a terrier, through and through; he may only stand a little over a foot high, but he’s not afraid to take on things much larger and much meaner than himself, often getting himself into a world of trouble. This is a spunky, determined and active individual who strongly seems to believe that the Devil makes use of idle hands (or paws, as the case may be).

Rough and rowdy, they have a strong tendency to chase other animals and some individuals can be very stubborn and difficult to housebreak. For best results, get them involved in obedience courses at a young age and, if your dog is overly active, perhaps contact local breeders to learn more about Earthdog competitions. 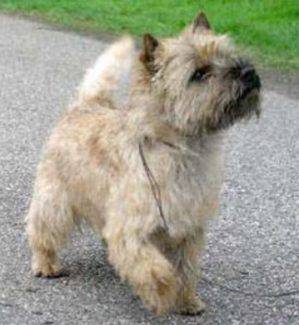 Cairn Terrier Walking on a Leash

This spunky little terrier is bred to lead an active lifestyle and he truly does enjoy it. Always on the go, they seem to be positively filled with energy, whether it’s bolting prey from the cairns of his namesake or tearing around the living room, these little guys love to move.

If you’re thinking about a Cairn Terrier, you had best be prepared to spend a fair amount of time with your little guy, taking him for a couple of daily walks per day (don’t worry, they don’t have to be far though). Be wary leaving these little impish canines alone in the fenced-in yard, however. One thing that a Cairn certainly loves to do is dig and many are escape artists. 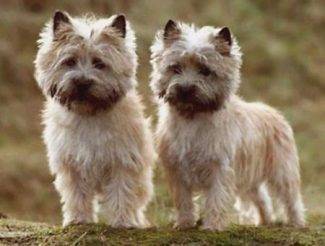 One look at the Cairn Terrier and you basically know that this is not a dog that’s going to stand still long enough to let you do some sort of fancy-shmancy poodle type of haircut on him. No pompons or doohickeys, thanks! No, the Cairn Terrier has a very simple style and that’s the classic bed-head do.

A weekly brushing and a chance to run the comb through his coat, ensuring there are no mats, and “scruffy” is good to go. If you simply must do something creative, a pair of scissors, gently applied, may be used to trim the occasional trouble spot on family pets.

In addition to brushing, you will want to give your Cairn Terrier baths as needed. Generally, this only means about once a month, but if you have a Cairn who likes to dig in the dirt and then roll around in the worms, it may be beneficial to bathe him a bit more often, particularly if you have white carpeting. Don’t forget to trim his toenails when you do so.

Training the Cairn Terrier takes patience and understanding. A naturally busy and energetic dog, they can be somewhat difficult to keep focused, so obedience training is highly recommended. Clicker-training success has been noted with some, as it keeps the dog more focused upon their owner, waiting to hear the sound.

Either way, Cairn Terriers work very well with the positive reinforcement method of training – don’t ever try to physically discipline your Cairn, however, as this can make them shy, sneaky, and nippish. 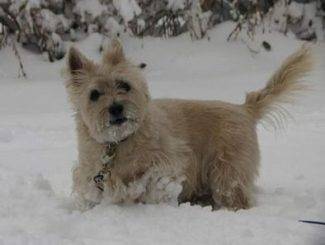 Cairn Terrier Playing in the Snow

Like any breed of dog, the purebred Cairn Terrier dog breed is subject to a variety of health concerns. For this reason, when deciding to choose a new Cairn Terrier puppy, check around with several breeders and ask about the various health issues that can affect these beautiful little dogs.

A good breeder should be well-versed in the health concerns and should be able to give you more details, as well as showing you the sire and dam of your potential puppy. Some of the health problems that can affect Cairn Terriers include:

Is the Cairn Terrier Dog Breed The Choice For You? 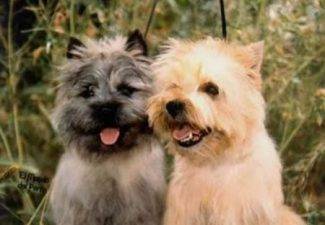 The Cairn Terrier is a wonderful family pet in the right home, but he is a pet that takes a fair amount of attention in order to keep him happy and healthy. Requiring regular exercise and his tendency to harass the cat may be too bothersome for some would-be owners.

Likewise, his love of digging and causing mischief may also weigh heavily. If you can get past those small hurdles and still want one of these sweet and loving dogs, a Cairn Terrier may very well be the right dog for you.

Be sure to check out several breeders and get to know some of them in person before you make any final decisions but, for the right family, the Cairn Terrier is the perfect little scruffy dog.